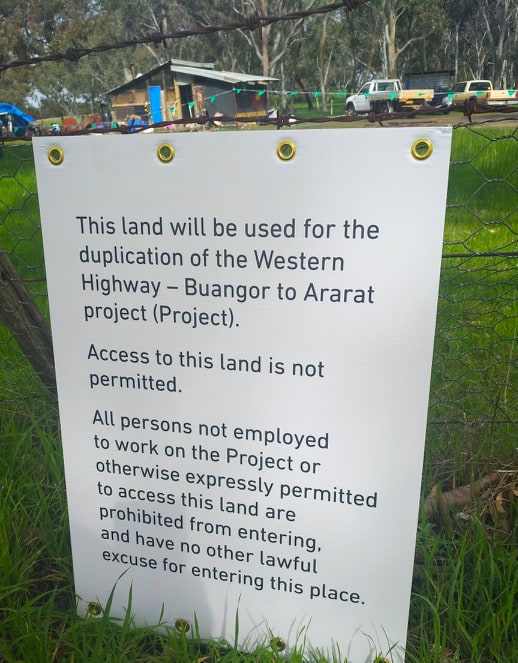 Barking Up The Wrong Tree

Traditional Owners at the Djab Wurrung Heritage Protection Embassy are furious this morning after police issued the Embassy with an eviction notice, giving the Djab Wurrung people 14 days to vacate their sacred landscape to make way for the Western Highway duplication between Ararat and Buangor

Since the protest camp was set up 14 months ago by the Djab Wurrung people, thousands of people have passed through the Embassy, expressing their support for the Traditional Owners in their efforts to protect country, sacred song lines and culturally significant trees.

“This notice says one thing, the Andrews Government wants to pick a fight with the Traditional Owners of this Land” says Zellenach Djab Mara, Lore Man at the Djab Wurrung Protection Embassy.

The Embassy has been opposing the duplication of a 12.5 kilometre stretch of the Western Highway, on the basis that it will destroy the Djab Wurrung song lines and hundreds of significant trees, including a 350 year old directions tree.

“This country belongs to the women and children of the Djab Wurrung people, our ancestors and our future generations. We are the traditional custodians of this part of country, and by not engaging with us, Daniel Andrews is asking for this to get ugly.”

The Djab Wurrung people have suggested an alternative route that would protect the sacred trees, and recommend that safety on the road can be maximised by lowering the speed limit. “At the end of the day there’s nothing to negotiate. This is women’s country we’re not going anywhere. Daniel Andrews needs to intervene and stop the destruction of our heritage. The eviction notice must be lifted and Major Roads Victoria needs to restart planning for this project, with Djab Wurrung at the centre of any negotiations.”