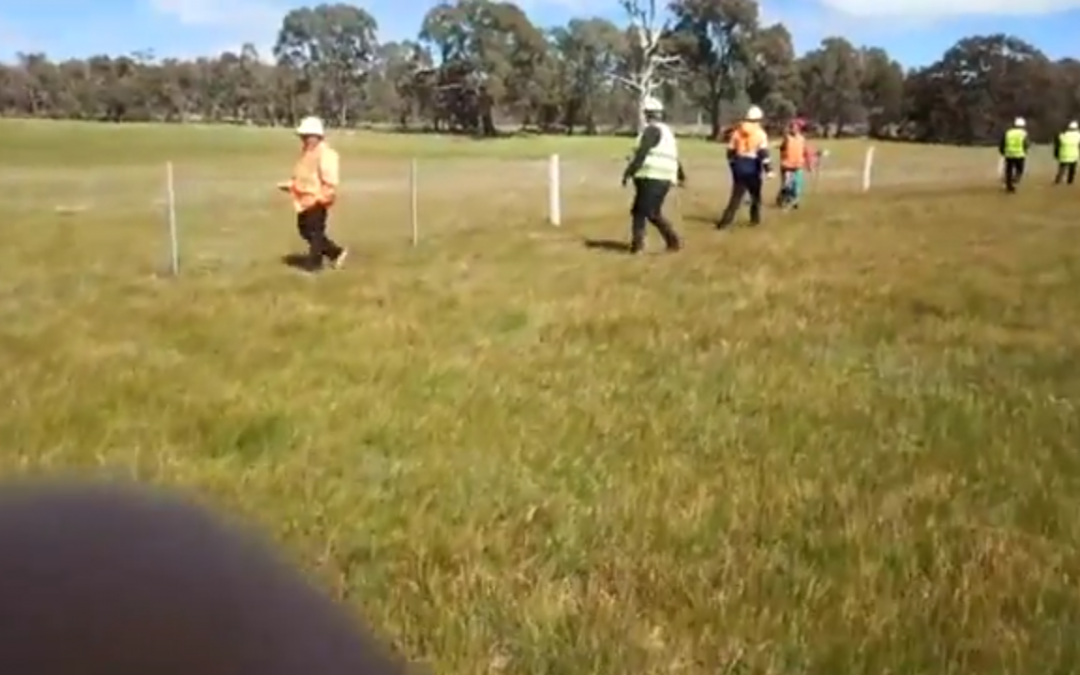 At 11 o’clock this morning, an adolescent male kangaroo nestled himself in the ancient hollow of a sacred birthing tree on Djab Wurrung women’s country. Within half an hour, a group of sovereign women land protectors had arrived to greet him. The moment they reached the tree, the kangaroo emerged and hopped off into the distance, having delivered his call to action to the sovereign women of the land. The content of the kangaroo’s message became clear as a group of high-vis-vested contractors and their hired security guards walked boldly onto Country, claiming to be conducting a “recommencement survey” in violation of a stop works order pending mediation with the sovereign Djab Wurrung people.

Violation is the only appropriate word for these actions, as Djab Wurrung women and their supporters were forced to place themselves in the way of the contractors to protect the sacred birthing tree and a camp that has been a haven for women, gender diverse people and young children as the standoff to protect sacred lands from a highway extension continues. The Djab Wurrung women continued to hold the space in the face of rising aggression and tension as the workers seemed determined to further intrude on the sacred landscape, approaching within metres of the sacred birthing tree and a culturally significant canoe tree.

Further support from senior Djab Wurrung men and allies soon arrived to peacefully escort the workers off Country, chanting “Always was, always will be Aboriginal land” and urging Vic Roads to conduct the appropriate processes for consultation in accordance with sovereign Djab Wurrung Lore.

Upon the Djab Wurrung women’s return from escorting the workers offsite, the same kangaroo passed by the birthing tree. “I reckon he’s telling us well done, you’ve done what I brought you here for, you’ve seen ’em off” said Djab Wurrung Heritage Protection Embassy Representative Amanda Mahomet: “These men came to conduct work in preparation to destroy our sacred places and violate women’s country, even while their higher-ups have made a so-called “commitment” to hold off until mediation. Could anybody reasonably see this as acting in good faith?”

“This is a place of sanctuary in which Djab Wurrung sovereignty has never been ceded and unless and until there is genuine respect for our traditions, our culture and our sovereign Lore we will answer the call of our Country and of our ancestors to protect and defend these sacred lands.” Amanda Mahomet, Embassy Representative.

Mediation is set to commence tomorrow.