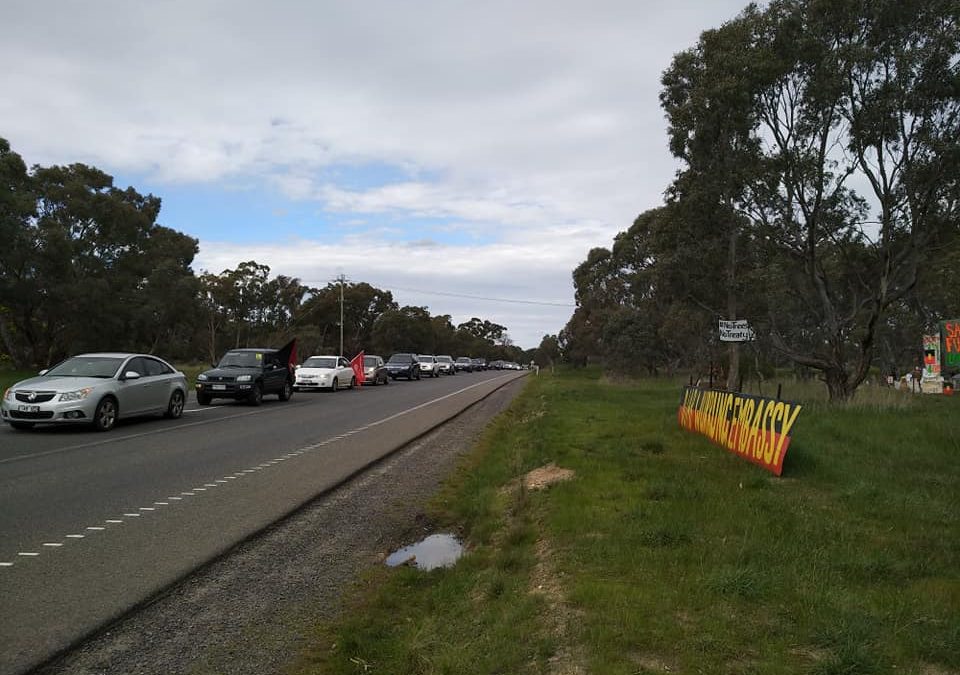 Union Convoy shows Daniel Andrews is out of step with the labour movement.

A Victorian Trades Hall convoy of 26 vehicles with approximately 100 union members arrived early Saturday afternoon in solidarity with the Djab Wurrung people’s struggle against the Western Highway Duplication between Ararat and Buangor. The eviction notice at the Djab Wurrung protection embassy is live and but support at the Embassy has continued to grow.

“We’ve been standing here peacefully, stamping our spiritual authority on our country for 15 months. To have our union brothers and sisters behind us only strengthens our position.” Says Embassy representative Amanda Mohamet

“We’re not going to thank people being here, because while we uphold this fight we have no freedom. But we welcome everyone who comes to show their respects on our country.”

The union convoy arrived lead by a blue ute flying the Indigenous flag and was described as beautiful by supporters on the ground.

“The union movement understands what struggle is, right now we have no justice on our country. We stand proud of all our mobs right across this beautiful continent, all over the landscape and we stand united with their struggles and their wars.” Says Amanda Mohamet

“At the end of the day, all we’re asking is for our country, our homelands to be safe. We’re asking for Daniel Andrews to follow this demonstration from the unions, to come and show his respect on our country, cancel the eviction notice and conduct an open dialogue with our First Nations People.”